Boris Johnson resigns: The race to replace Boris Johnson has begun, after the prime minister quit as Tory leader following a dramatic few days that saw his authority collapse.

Tom Tugendhat is the latest MP to throw his hat into the ring, joining Attorney General Suella Braverman and Brexiteer Steve Baker who have shown interest.

Mr Johnson plans to stay on as PM until a new successor is found by the autumn.

However, many colleagues and opposition politicians want him to leave now – but he has already filled cabinet jobs.

Mr Johnson resigned on Thursday, following two days of desperate attempts to cling onto power amid a flood of resignations.

Nearly 60 Conservative MPs have quit government roles in recent days at both senior and junior levels, raising doubts about the government’s ability to function.

A timetable for the Tory leadership race is due to be confirmed next week and the new prime minister is expected to be in position by September.

But unofficially, the contest is already under way. The chair of the foreign affairs committee Mr Tugendhat, launched his leadership bid by writing in the Daily Telegraph on Friday, promising tax cuts and “new energy and ideas” for government.

“I have served before – in the military, and now in Parliament. Now I hope to answer the call once again as prime minister,” said the former soldier, who has been a prominent critic of Mr Johnson.

Attorney General Ms Braverman has already confirmed she will stand, while former Brexit minister Mr Baker said he was “seriously” considering running after being asked by people to do so.

Sajid Javid, the former health secretary, and Transport Secretary Grant Shapps – who both revolted against Mr Johnson – are also considering putting their hats into the ring, the BBC has been told.

More declarations are expected in the coming days – but some senior Tories have already said they will not be running, including former Levelling Up Secretary Michael Gove, Deputy Prime Minister Dominic Raab and former Health Secretary Matt Hancock. 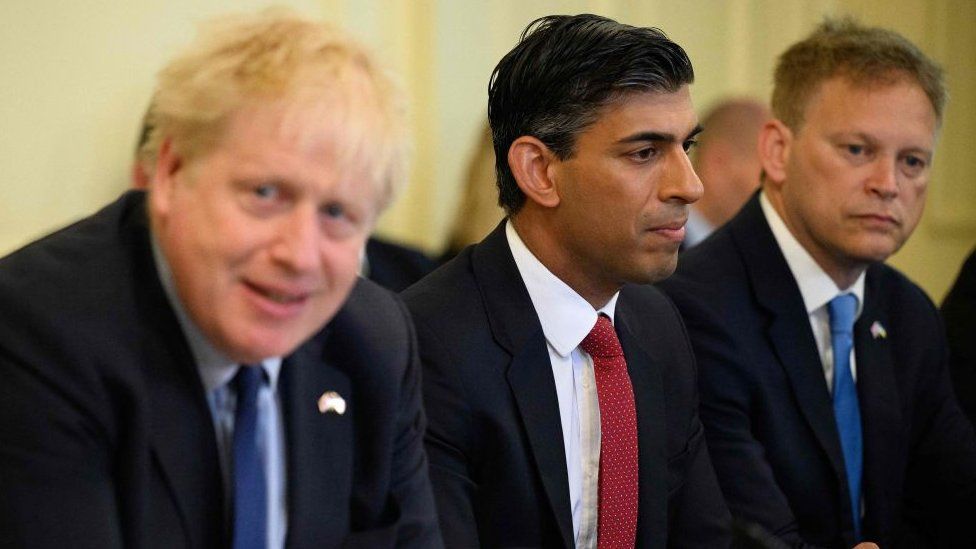 Brexit minister Jacob Rees-Mogg criticised Mr Sunak on Thursday, saying he was “not a successful chancellor” and “not alert to the inflationary problem”.

Speaking on Channel 4 News, the Johnson loyalist said the PM had been an “exceptionally good leader” who had been brought down by some “relatively minor missteps that got taken out of all proportion”.

Transport minister Robert Courts said Mr Shapps, who he works alongside, would be a “great choice” and also suggested Ben Wallace, the defence secretary.

It may not surprise you to discover that Westminster is a postcode which doesn’t suffer a deficit of ambition.

The wannabes will fight a popularity contest among Tory MPs in the next few weeks, and should two of them be left at the end of that process, Conservative Party members will get the final say over the summer.

Somewhere between 100,000 and 200,000 people will be charged with selecting the next head of our government on our behalf.

It is a safe bet the next prime minister will be a very different character to Boris Johnson. Given the manner and motivations behind his toppling, being seen to ooze integrity and revere truth are qualities all the candidates will aspire to illustrate.

But beyond that there will be an intriguing debate about what it means to a Conservative in 2022.

When a new leader assumes office, the political landscape will instantly shift.

Asked about what he would want in a new leader, he said someone with domestic and international experience and “someone who is patently moral and decent”.

MP John Baron said he thought a new leader should focus on the cost of living crisis, levelling up and helping the most vulnerable in society.

It is important that “integrity” is at the heart of the government, he told the BBC.

Any candidate for the leadership race would need to secure the backing of Tory MPs, with the final two candidates then going to a ballot of Conservative members.

Some Tories are deeply unhappy that Mr Johnson is not quitting as PM immediately, with the former Prime Minister Sir John Major saying it would be “unwise” for him to stay until a replacement is chosen.

Former Conservative minister Justine Greening said it was time for Mr Johnson to go and while he remains in No 10 “it’s harder for the party and the country to move on”.

But Lord Vaizey who formerly served as a minister for David Cameron, said it was “fine” for the PM to continue “to act as caretaker”.

Getting rid of a prime minister can lead to “dissatisfaction” with party members and voters who elected them, he told Newsnight.

The Labour Party has also threatened to try and unseat the PM immediately through a vote of no confidence, although this would need considerable support among Conservatives to succeed.

According to Downing Street, Mr Johnson told ministers at a cabinet meeting on Thursday that he would not seek to implement “major changes of direction” or take “major fiscal decisions” while a caretaker PM.

The prime minister’s resignation followed a revolt by ministers over his leadership, which was sparked by the way he handled sexual misconduct allegations against former deputy chief whip Chris Pincher.

Initially he tried to replace ministers who had quit, until it became clear that he had lost the confidence of the Conservative Party.
In his resignation speech outside No 10 on Thursday, Mr Johnson said he had tried to stay on to deliver on his “incredible mandate” from the 2019 election.

He cited various achievements including Brexit and the Covid vaccine program me.

He said his departure was a result of the “herd instinct” at Westminster and it would be “painful” to not deliver on “so many ideas and projects”.

Mr Johnson also spoke to President Zelensky of Ukraine, reassuring him that his replacement would remain as committed to the war-torn country as he was.